When someone lives with Type 1 Diabetes, they are dependent on insulin. Not having insulin can very quickly become deadly.

I'll give the example of insulin pumps. Insulin pumps can be unplugged for up to an hour. If you leave it off any longer, in the hours following not having any insulin, blood sugar will start to rise. The lack of insulin in the body causes something called “ketones”. Ketones are acidic molecules and having too many ketones in the body will become toxic. All of this leads to something called Diabetes Ketoacidosis (DKA), which usually develops over 24 hours.

The following is what happens to the body when no insulin is present, leading to DKA:

Stage 1 – The lack of insulin means my blood sugar will start to rise. I start to have low energy, feel thirsty and need the urinate more often.
Stage 2 – The body starts to produce ketones in the blood stream due to lack of insulin (ketosis). I feel thirstier and need to urinate more, fatigued and slightly nauseous.
Stage 3 – Ketones end up in urine (ketonuria). I feel more significantly thirsty and fatigues, very nauseous and have body aches and headaches.
Stage 4 – Diabetic Ketoacidosis sets in. I start vomiting, becoming confused, dizzy, start taking deep/laboured breaths and have a “fruity” smell to my breath. I am very ill.
Stage 5 – I fall into a coma due to severe Diabetic Ketoacidosis.
Stage 6 – Death.

I am very lucky to live in a country that provides me with live-saving insulin free of charge. Not having insulin is extremely deadly, yet the reality is that some people in the world living with Type 1 Diabetes have very little access due to the cost of it. In countries such as Brazil, Ghana, India and Zambia, the cost of living with diabetes is over 80% of their average income, meaning it is near impossible for people with type 1 diabetes to afford to manage their condition.

In the Universal Declaration of Human Rights [Article 25], it says “Everyone has the right to a standard of living adequate for the health and well-being of himself and his family, including food, clothing, housing and medical care”. Health is a HUMAN RIGHT, and yet people all over the world are being denied that right.

Insulin was first used to treat a person with insulin in 1922, and the patent was sold for £1 to ensure that it was accessible to all. There are 3 main insulin producers, which are Eli Lilly, Novo Nordisk and Sanofi, who dominate over 90% of the insulin market in the UK, and since the 1990s, the cost of insulin has increased by over 1200% whilst under the rein of these companies. This is a massive problem, because unlike people living in the UK who have the NHS (National Health Service), individuals must get their own health coverage. Stats show in the US that 8.8% of Americans are uninsured and 47% have high deductible plans, that 1 in 4 people living with diabetes have rationed their insulin, and many people in the US have died due to lack of insulin.

It is ABSOLUTELY ATROSIOUS that in a first world country such as the US, people are still dying from lack of insulin, with is supposedly a fundamental human right.
There are a few charities, such as T1International, that are campaigning against this health discrepancy, trying to ensure that everyone with type 1 diabetes has access to a life-saving drug that they are dependent on. T1International run a campaign called #insulin4all with a charity called The Pendsey Trust, which unites the diabetes community together to fight for access to diabetes medicine and technology. 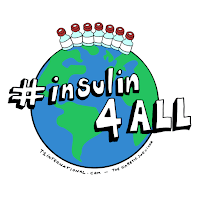 I’m writing this blog to show the stark reality of living with type 1 diabetes. It is an expensive condition to manage, and although I am lucky enough to live in Scotland where my medical expenses are covered, so many people are not. We need to band together and continue to fight and raise awareness of this issue!