The Injustice of Minumum Wage

I work in the food industry, and that means that as a 19 y/o receiving minimum wage, I get £5.60 an hour for my labour. In 2017, the living wage was set at £7.50 for those aged 25 and above, and this was implemented to make sure that those working had enough money to live on. This doesn't sit right with me, because by putting an age limit on the living wage comes an assumption that those aged under 25 don't have as many responsibilities. I have rent and bills to pay, food to buy, and it isn't fair that because I'm not old enough, I'm not entitled to the same wage as a 26 y/o when I am doing the exact same work!

Let's say that a 20y/o student was receiving the minimum student loan, which didn't cover rent costs. With a minimum wage job, the money still may not cover living costs, forcing them to either use a student overdraft or a payday loan. All of these things are a sticking plaster, a means to get by from day-to-day, and have to be paid back eventually. Now with the student loans that already need to be paid back, and the loans that allow day-to-day operation, the debt only gets worse. It has become acceptable to offer someone a temporary fix rather than pay someone a fair wage, it's another way to avoid responsibility. 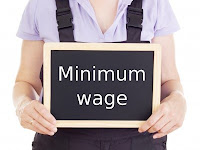 According to "livingwage.org.uk", the UK average for what the real living wage should be is £8.75, and yet the national living wage is £7.50, so already there is a disparity in what is needed and what is provided. Yet I, because of my age, something that is completely outwith my control, earn £5.60, which means I earn £1.90 less per hour than my colleagues at the same level as me who happen to be over 25.

In my work, everyone is trained in the same way. Everyone does the same work. Everyone works the shifts they are given. The minimum wage was calculated by the UK government based on what they thought employers could afford, however by doing this it is saying that the profit the owners get is more important than the wage employees deserve. According to "livingwage.org.uk", businesses get increased motivation and retention rates when they pay a decent wage, and that is improves relationships between managers and their staff. Paying staff an equal and fair wage has so many benefits.

It is ridiculous that there is still a wage gap. There has been massive steps forward in terms of equality in recent years, for example, recently woman have celebrated 100 years of the vote, but there is a massive way to go. Having the minimum wage law allows employers to continue on a hierarchy, with the gap between employers and employees becoming wider, with people on low incomes still struggling to get by, and the profit staying at the top. They say one step at a time, but surely my wage should be determined based on how hard I work, rather than how old I am!