My Assertiveness paid off in hospital

Last Year I had to have a minor operation on my foot which required general anaesthetic. I was worried about things because I didn’t want the hospital to take my pump and continuous glucose monitor (CGM) away and put me on a sliding scale (a drip of insulin and a drip of glucose). I had to go into the hospital early so that the nurses could help me with fasting and make sure I never went hypo. 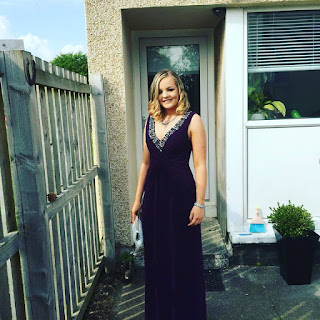 I went prom dress shopping with my mum in the January sales, in search of a bargain. I instantly fell in love with a purple dress, with clingy fabric and a low cut neck. I felt beautiful in it, but I never took into account where I would put my insulin pump. The low cut neck meant that when I put my pump in my bra, as I do quite often, it would poke out the top. The clingy fabric meant that if I wore my insulin pump in a belt around my waist, there would be a visible rectangle shape showing. If I wore it on a garter on my leg, I would have to reach up my long dress and fish around under there to fetch my pump. Normally I wouldn't care about my insulin pump showing, it is a part of me, but on this one night I wanted to look perfect, so I opted to move back onto injections for the day, but still carry around my Insulin Pump so I could see the values from my CGM. 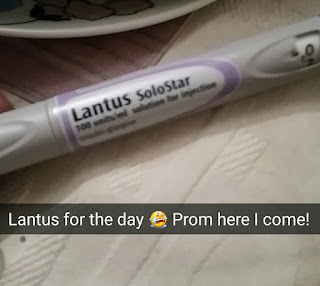 On the night before prom, my mum helped me calculate my background insulin dose, which I would have to inject because my pump wouldn't be doing it as it normally would. We hadn't had to do this for a long time, and we made a mistake. Instead of adding insulin on to our daily dose, as you're supposed to do, we took it away. It resulted in me having high blood sugars of 30.1 in the morning, and ketones of 0.8 (for those who don't know, these levels would make me very unwell. I felt thirsty, very lethargic and very sick). This was not what I needed on the day of prom. 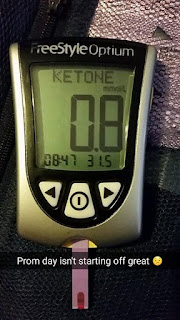 By the time my friend Emma picked me up at midday (Emma and I were getting our hair and make-up done for prom together), I had gotten my blood sugar back in range by injecting several correction doses. I never ate anything until prom, and just had one correction dose until 8pm and that kept my blood sugar under control. I was glad about this because it meant that I could enjoy preparing for prom without worrying about my health.

It was lovely when arriving at the school seeing everyone looking so beautiful and handsome, and having everyone smiling and socialising. We hadn't seen everyone since the last day at school, so this was a fitting reunion and goodbye for everyone. Pictures and compliments were thrown about the whole day, with everyone gushing with happiness and smiles. It was brilliant.

Dinner was lovely. All the tables were mixed so that we sat with people we weren't best friends with, and it allowed us to be a lot more social, and get to know people we normally wouldn't talk to. At dinner I had to inject the insulin for my food in my arm, because I was wearing a full length dress and no where else was accessible, which brought questions in which I was more than happy to answer.

It was at this point I realised I had left my blood glucose meter at my friend, Emma's, house. Panic! Even though I had my CGM, my blood glucose had risen too high for my CGM to register a reading. I couldn't give myself a correction without risking giving too much and having a hypo, so I just left it, and felt unwell the whole night.

The night overall was amazing. Everyone, including the teachers who attended, were up dancing together and enjoying themselves, and everyone was mingling as if they were best friends. The end of the night was perfect, with a fitting Scottish song and every single person in the room on the dance floor.

When the night was officially over, there was a lot of crying from everyone. Everyone realised that this was the last time we were ever going to see each other, and therefore there were a lot of farewell hugs and tears.

Even though I did feel unwell for the majority of the night, it was the best night. It was a wonderful, fitting event to our 6 long years at Kilwinning Academy, and I'm so glad I was a part of it!

Alyssa x
Posted by AlyssaRose at Tuesday, June 28, 2016 No comments:

" I had been to several child care events, and loved them. The experiences were life changing and the people I met were wonderful. So when I got the opportunity to volunteer at an adult care event, in the form of Type 1 in the City, I jumped at the chance."

Read the rest of the blog here :-

I am so proud of you. You have done so much despite having type 1 diabetes and you are truly an inspiration.

We wouldn’t have met unless we both had Type 1 Diabetes, but that is one of the big positives about having it. I met my best friend, and I wouldn’t trade that for anything.

You helped me feel confident about going to the care event where we initially met. By meeting you prior to the event, you made me less anxious about going to an event with 23 strangers, and I can’t thank you enough for that.

The first meeting we had when you came to a town near to where I lived was very awkward. We made small talk, went bowling, had ice cream, but it wasn’t until I had a hypo and you helped me that we truly bonded. I didn’t feel abnormal around you like I did everyone else because you knew what it was like to have the added challenges of Type 1 Diabetes.


For the duration of the care event we both attended, we stayed close friends. Even though for many of the events we were in different groups, you still accepted me with open arms. After the event, there were many skype calls with the others from the event, and the numbers eventually dwindled down until there was 2.

I am so glad that we met again at the People with Diabetes Conference. It just reinforced our friendship and made us closer.

Every time I see your achievements and all the amazing work you do, I am so happy for you. You do so much amazing work and you take everything in your stride. You get so much recognition for your work, and you deserve it.

We are friends despite of the distance that separates us. If anything, the distance makes our friendship stronger, because when we do see each other it's that bit more special. We are friends because we both understand the stress that diabetes causes us, and are able to support each other.

Lydia, Thank you for being my dia-bestie!
Posted by AlyssaRose at Thursday, June 02, 2016 No comments: